After a long stretch of stronger-than-expected Canadian jobs growth, it is not surprising that this notoriously volatile data series took a breather. There was little change in the number of employees in both the public and private sectors in June. The Canadian economy shed 2,200 jobs last month as self-employment fell 1.4% and other employment edged up only 0.2%. Despite this slowdown, the economy enjoyed the most robust first-half growth in jobs since 2002.

One positive note in the June report is that full-time jobs were up by 24,100, offsetting a decline in part-time work. Also, wage gains accelerated to the fastest pace in more than a year, with annual pay gains up 3.8% in June compared to 2.8% in May. Another good sign is that total hours worked accelerated to a 1.8% annual-rate gain, up from 1% in May.
The unemployment rate ticked up to a still-low 5.5%, after touching a forty-year low of 5.4% in May.

The recent pace of hiring was unsustainable, so a slowdown was in the cards. The June data, however, does not alter the picture of a red hot labour market driving Canada’s economic rebound. The Bank of Canada has significant reason to resist cutting interest rates when it meets again July 10 and September 4, even if the Federal Reserve decides to ease monetary policy. The Fed’s next decision date is July 30, and it is under continuing pressure from the White House to take rates down a notch.

The Bank will see the strength in wages and hours worked, along with the still low level of unemployment, as plenty of reason to remain on the sidelines. After the dreadful performance last winter, the Canadian economy has bounced back as the central bank predicted. A string of recent reports shows the expansion picked up at the fastest pace since 2017 in March and April. Business and consumer sentiment rose in May and housing activity is improving in most regions. Exports are recovering as trade tensions between Canada and China remain. It appears that the US trade war with China is on hold for now, as the two countries agreed to go back to the bargaining table forestalling a threatened rise in US tariffs on China. 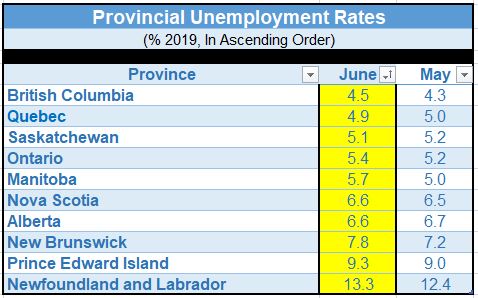 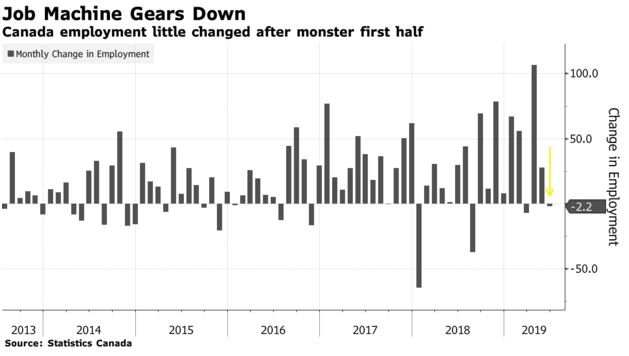 Local real estate boards report that GTA home sales jumped again in June, while home sales fell to a 19-year low in the GVA. This continues a well-established pattern.

GTA sales were up 10% year-over-year last month. New listings fell 0.4%. Buyers started moving off the sidelines in the spring, while new listings remained virtually unchanged, so market conditions have tightened, and price growth has picked up, especially for condos as more affordable housing has outperformed.

In direct contrast, sales in the GVA were down 14.4% year-over-year last month and are a whopping 34.7% below the 10-year average for June according to the Real Estate Board of Greater Vancouver–the slowest sales pace for June since 2000. Moreover, the residential benchmark price slipped to $998,700, down from a record high of $1.1 million in May 2018. The benchmark figure, an industry representation of the typical home sold in Greater Vancouver, has declined month-over-month for the 13th consecutive time.
The slowdown in the Greater Vancouver housing market is the result of intentional actions by regulators and government. Provincial actions compounded the January 2018 introduction of the B-20 stress-testing rules, which made it more challenging to qualify for a mortgage. Since February 2018, the provincial government has rolled out tax measures, including a ‘speculation and vacancy tax’ targeted primarily at out-of-province residents who don’t rent their homes. Also, there are new taxes on properties valued at more than $3-million, such as an extra land-transfer tax and an annual surtax. Last year, the province also raised the foreign-buyers tax to 20% from 15% in the Vancouver region while also expanding the tax to other urban BC markets.

Also, the province is about to publish a property ownership registry to reveal the actual owners of all properties to combat money laundering through real estate transactions. Formerly, many properties were registered in the name of numbered companies. As well, the Chinese government is now enforcing capital export limitations and penalizing those who broke these restrictions in the past. The new registry will make these activities far more transparent and could well contribute to the weakness in foreign transactions in BC, where foreigners accounted for a proportionately more significant share of the housing market than in other parts of Canada. The recent turmoil in Hong Kong might change these dynamics, but it is too soon to tell.

Chief Economist, Dominion Lending Centres
Sherry is an award-winning authority on finance and economics with over 30 years of bringing economic insights and clarity to Canadians.